Intersections are cross sections of a grid model that cut the grid in various ways to display grid cell values. There are two main types of intersections:

Structural uncertainty can be visualized on intersections as described in Ensemble Surface. 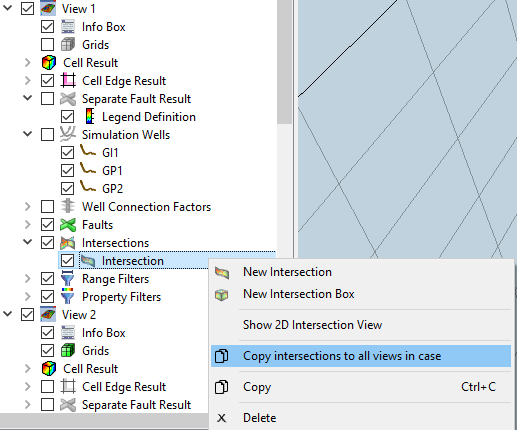 There are four types of curve based intersections: Well Path, Simulation Well, Polyline, and Azimuth and Dip. Azimuth and Dip differs from the other three curves, as it is defined just by one straight line. It is called Azimuth and Dip because the plane’s extrusion direction can be defined by the two angles.

Any of these intersections can be created by activating

To be able to see the intersections in the 3D view, the grid cells can be hidden by disabling the Grids item in Project Tree or activating the Hide Grid Cells toolbar button.

The property panel of a well path based intersection is shown below: 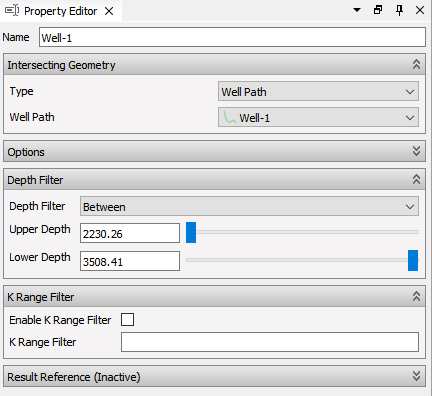 Direction is used to extrude the curve in the defined direction, and thereby create a set of planes. Horizontal implies the start and end point of the curve is used as a baseline, and the horizontal direction is thus perpendicular to that line. By Defined by two points, the user can define the direction based on any two points. The direction from the first to the second point defines the extrude direction.

A new Well Path intersection can be created by right-clicking the well path in the 3D view or in the Project Tree.

When a well path intersection is created, the source well path can be changed by using the Well Path selection combo box in the Property Editor.

A new Simulation Well intersection can be created by right-clicking the simulation well in the 3D view or in the Project Tree. 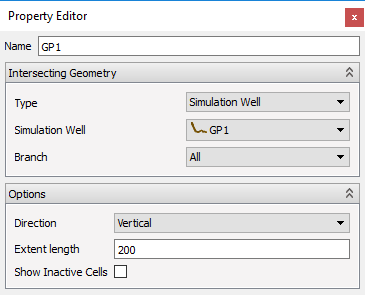 If the well contains more than one branch, the intersection geometry will be created for the selected branch in the Branch combo box.

A new Polyline intersection can be created from the right-click menu in the 3D view. Then, by left-clicking on reservoir geometry, a polyline is created. The points are added to the point list in the Property Editor. 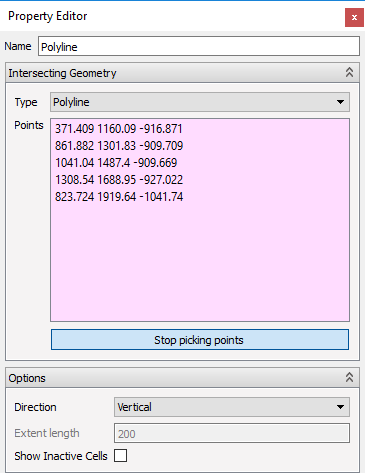 The points in the list can be deleted and edited using the keyboard. To append more points (by clicking in the 3D view), press button Start picking points again.

A new Azimuth and Dip intersection can be created from the right-click menu in 3D view. Then, by left-clicking two points on reservoir geometry, a single line is created between the first point, and the second point projected down to the plane with same z-value as the first point. The two points are added to the point list in the Property Editor. 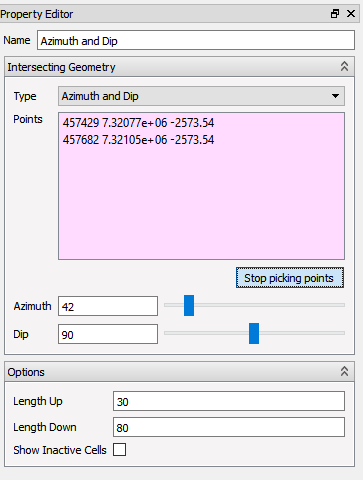 The points in the list can be deleted and edited using the keyboard. To append more points by clicking in the 3D view, press button Start picking points again.

The points in the list can be copied to clipboard using CTRL-C when in keyboard focus. A new list of points can be pasted into the point list by using CTRL-V.

When two points are picked, a plane between the points will appear in the 3D view with a 90 degrees Dip, and the Azimuth angle calculated from the two points. The two angles can be edited in the Property Editor of the intersection:

The length of the plane can also be set manually in the Property Editor. 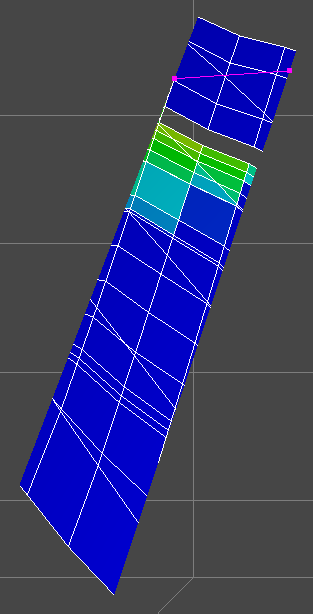 Each of the curve based intersections have a corresponding 2D Intersection View. Management of these views are automatic. They will be created and deleted along with the intersection.

Scales along the edges of the view show the depth and the horizontal length of the intersection. The length is measured from the start of the wellpath or the well head of a simulation well.

The view is mostly controlled by the options in the 3D view where the intersection is defined. There are, however, some independent controls, like drawstyle, timestep and Z-scale: 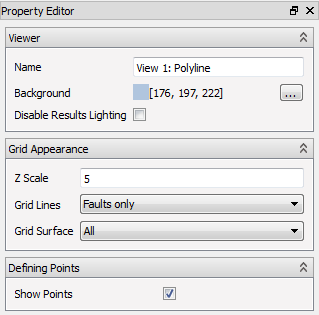 The following list describes the properties for an Intersection Box:

Direct interaction in a 3D view is activated when Show 3D manipulator is pressed. Handles are displayed at the sides of the intersection object, and interactive modification is done by dragging a handle in the 3D view.

An intersection can be visually filtered, i.e. partly hidden from display, by employing a user defined Depth Filter. Depth filtering is performed by selecting an intersection in Project Tree and setting the Depth Filter properties in Property Editor: 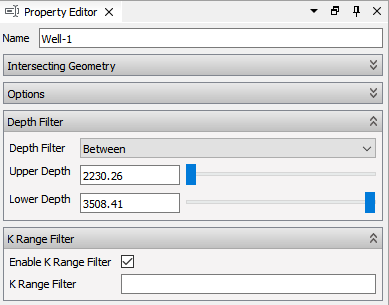 To select a simulation result to display on an intersection, right-click Intersection Results in Project Tree and select New Result Definition.

By selecting a specific Intersection Result, the Property Editor allows to specify case, type or position etc depending on whether the result stem from an Eclipse case or a Geomechanical case.

The next step is to select an Intersection in Project Tree and define Result Reference. In the example below, available sources are the two Intersections Results of previous figure, one of which stems from a geomechanical case and the other from an Eclipse case. 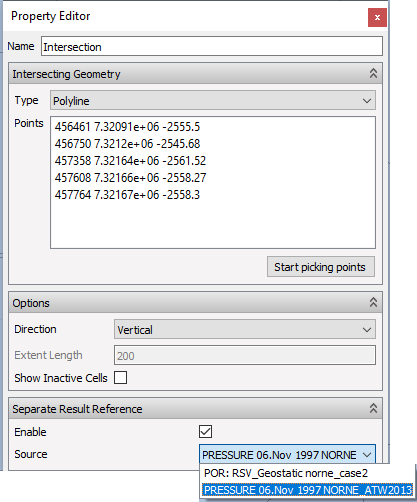